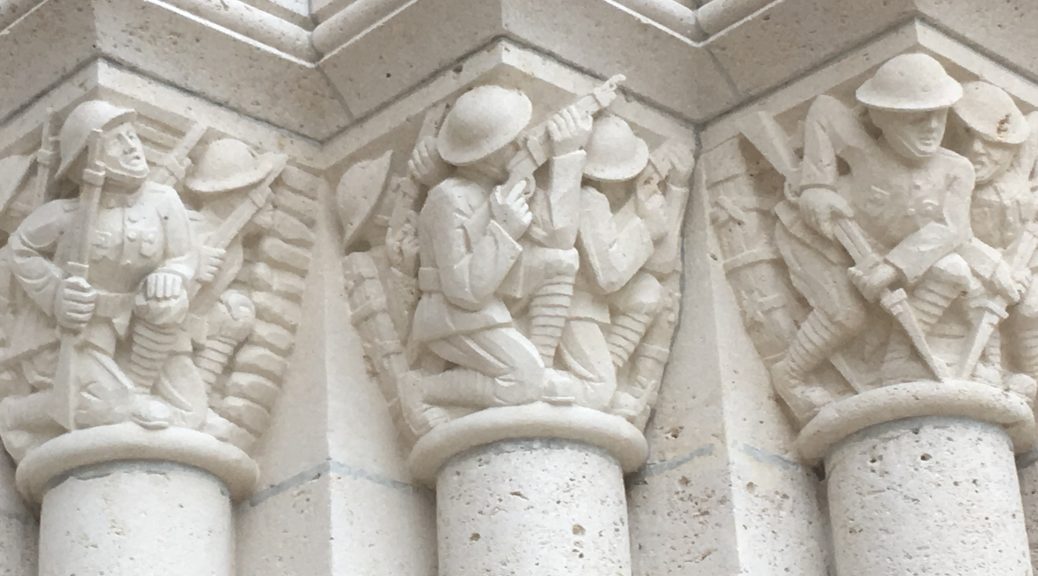 In 2011 Jennifer Kilgore-Caradec a specialist of poetry, especially war poetry, brought the project of Arts of War and Peace to LARCA at Paris Diderot. She was welcomed to LARCA by Robert Mankin who directed the Équipe d’accueil at the time. Mark Meigs, as a specialist of World War One and the cultural effects of war took on the task with Jennifer of making Arts of war and Peace a reality: an on line review dedicated to the notion that in the study of war can be found the seeds of peace and in a vigilant examination of peace agreements, negotiations and movements can be found the warnings of future wars. The two are inseparable.

Two numbers brought to the review by Jennifer Kilgore-Caradec were published in 2013 and another, edited by Mark Meigs which was the result of a conference on war photography, organized by François Brunet who succeeded Robert Mankin as director of LARCA (Le Laboratoire de recherches sur les cultures anglophones UMR 8225) , came out in 2016. Now we bring out a fourth number based on work largely collected by Clair Bowen as long ago as 2007, where articles compare aspects of the two World Wars of the 20th Century. It is as if even as our subject moves ahead in leaps and bounds bringing different  kinds of war into being with their different representations of those wars that in turn bring about different reactions and different political and cultural challenges—cyber war, weaponized news—we go backwards, looking again at the familiar tropes of European loss in the 20th Century and reaction to that loss.

Nothing could be more an expression  of an old highbrow Europe coming to grips with the destructive tragedies of World Wars than Gilles Couderc’s article on the operas and oratorios of Arthur Bliss, Ralph Vaughan Williams and Benjamin Britten. The composers use of old forms and ancient texts with  modern forms of poetry and the studied dissonance of modern music lets us hear a shared cultural herritage bravely surviving machine guns and atom bombs. The fascinating personal connections between the composers, their mentors and contemporaries,  friends or lovers sometimes lost to war, defy war and even death in the form of music that traces its origins into the history of orchestras, courts and choirs. Then we encounter the popular music of the wars in the work of John Mullen and the costs to Europe are driven home to us. Maybe Benjamin Britten could hold so much culture together in his work in the face of destruction, but who listened or listens? It is work to perform, understand or even find a performance of Britten’s work to listen to live. Meanwhile the popular music, full of nostalgia and humor and pathos that slipped so easily from radios and phonographs into ears and lives of listeners at the time, is maybe even further from us than the work Couderc wrote of. The popular music is quaint now, a scratchy memory of the warbling voice of a particular crooner or song bird accompanied by a style of orchestration and popular dancing rhythms now dated in a way that formal music, preserved by classical rules and traditions, resists.

Our fronticepiece, is a photograph taken by Jean-Yves Caradec during a  visit corresponding to the hundredth anniversary of the armistice ending the hostilities of of World War I on the Western Front in November 2018. We see the entryway to the memorial Chapel at Belleau Wood Cemetery, one of many cemeteries maintained by the American Battle Monuments Commission around the world. Caradec has focused on a detail that  bears some resemblance to the music of Benjamin Britten, Aurthur Bliss and Ralph Vaughan Williams. The sculpture is an attempt to understand the catastrophe of World War I and yet contain it in old European cultural forms. Cram and Ferguson, architects of the memorial, a chapel that is also a strong fortress tower, were part of a neo-Gothic trend in American church and academic architecture that lasted through the 1920s and beyond. Nothing represented an imagined European cultural unity better than the great cathedrals built across the continent from the 12th to the 15th Centuries. Americans could join that unity by building in a similar style. Saint Patrick’s Cathedral in New York City is an early example of this, St. John the Divine, unfinished, is likely to be the last. The unity and strength of European culture should be celebrated and defended, the chapel fortress memorial says.  A medieval  sculptor of the capitals of these multiple columns supporting the portals of a tower, would have included a unifying, Christian symbology, but sometimes, such sculptors added profane imagery from everyday life and demons as well. The message was that Christian  religion instructs followers to look towards heaven and follow Christ, while not forgeting that our nature is very much earthbound and subject to grossness and temptation. Here, in work of the mid-1920s, the sculptor, Alfred Bottiau, shows American soldiers in their typical rolled leg coverings, shooting with guns, stabbing with bayonets, crouched and cramped as if sheltering in trenches. Can such means defend a peaceful and shared culture? What is being memorialized? Is it the shared doctrine of the Prince of Peace that cannot survive without the violence of war? Or has peace come, relegating the violence of war to  cramped space high on columns? In any case, war and peace are inextricable in this peaceful memorial space. It is that tension we all share and that we must face to get from a state of war to a state of peace and to recognize and learn to avoid in peaceful activities, the possible provocations of war.

It is interesting to note that on November 10, 2018 when President Donald Trump was scheduled to visit this monument he skipped the appointment. From his hotel room, Trump saw other dignitaries on television that day, among them Angela Merkel and Justin Trudeau. They were visiting the monuments to their countries’ dead of World War I. This motivated Trump to visit another American Battle Monuments Commission site the next day, this one at Suresne, just outside Paris. Trump was able to give a speech with the Eiffel Tower over his left shoulder, thus winning a media image battle with the leaders of Nato allies whose burial places didn’t include such a view, while snubbing his French host, Emmanuel Macron whose scheduled meeting he skipped that day. To think in terms of winning and losing in a very short term context, without  an awareness that winning may imply the use of behavior that may be a provocation for future retaliation by the loser, is exactly what the complicated design of that arch at Belleau Wood warns against. It is that relation between war and peace that our review wishes to examine. Needless to say, President Trump ignored The Peace Forum that took place the afternoon of 11 November after his performance at Suresne, again snubbing his peers, with the exception of Vladimir Putin. But who can win a Peace Forum?

In the age of Gothic architecture, Christianity held out the promise of a unifying force for Western Civilization, in the age of Trump, it is social media that holds out this promise but also provides a field for abuse. Here, the article by Cécille Vallée might be seen as the visual counterpart to John Mullen’s on popular music, moving away from highbrow realms. The images of propaganda surround us now as they surrounded participants and witnesses of the two World Wars of the 20th Century. Is this our shared culture? Vallée has concentrated mostly on British, but the same themes vilifying or mocking the enemy can be found in propaganda of other places. The ubiquity of these images and the violence of the struggle for our attention and understanding have not gone away. Any single image may be dated, but this struggle is continuous. Our awareness and ability to analyse must be continuous too. A trip to the past of gothic revival or war propaganda needn’t leave us in the past at all.

That message is underlined here by Mary Robertson’s article, “Remembrance and Imagination,” about the different destinies of the John McCrae poem of 1915, “In Flanders Fields.” The sad poem recalling the duty of the living to remember their debt to the struggles of the dead by continuing those struggles, has often been recited on Canadian Remembrance Day and memorized by school children. But it can also be quoted on Canadian banknotes printed with present value and future money exchanges in mind. Does this use of the emotional capital created by the poem for present debts, completely distort the past or carry it forward? The poem also appears on the wall of an National Hockey League team’s locker room inspiring future victories divorced from any regret about the past. In that use, memory has become as fungible as cash, which of course, unlike memory, we only carry thinking of our future needs.

The last article by Elizabeth de Cacqueray explores oral histories of women who lived through World War II  in Brighton. The author attches her work to a theory and structure of memory of war that either compose or de-compose meaning as the survivor of war progresses through life. In memories recounted by actual witnesses, rather than reconstructed from the objects of high or low culture, be they phonograph records, posters, orchestral music  or poems, war seems to have become the culture itself. “The war is our reference point still,” says one of these interviewees, after decades of peace. “Everything was authentic because we did it ‘devant la mort.’” In these memories recounted with almost no cultural references beyond the shared fears, freedoms, opportunities for women and their limits brought on by war, we cannot escape the centrality of war to people’s understanding of themselves unless we can imagine a whole generation at peace.

Technologically, Arts of War and Peace has not gone backwards either. We are able to attach links to the music and to short bits of film. And of course, our readers on line, can find their own way to recordings and films too. We hope that looking back into that rich European heritage in our own troubled times will give us a way forward. How will we understand what is going on around us without the tropes of high and low culture to compare and without the tropes of forms adopting and surviving great loss.

We have had some losses of our own. The entirely unexpected deaths of Robert Mankin (1952-2017) and François Brunet (1960-2018), both supporters of this project and both with visions of how it might work inside LARCA and be useful in larger contexts as well, have left us more determined than ever to find our way into the present of war but also the future of peace.

Cécile Vallée
From ‘Hun’ to ‘Jerry’ : The German Enemy in British Propaganda Posters during the Two World Wars

Megan Robertson
Remembrance and Imagination: In Flanders Fields as a Cultural Tool of Collective Memory

Cathy Parc
‘At the visionary edge’:  A Review of John Greening, To the War Poets